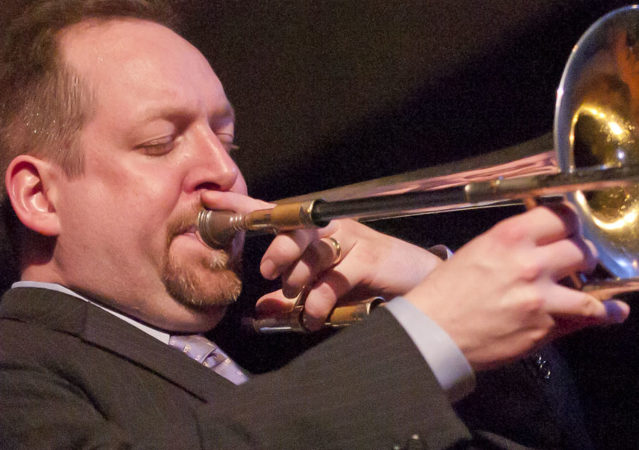 Steve Davis is widely regarded as one of today’s leading improvisers on the trombone.

His lyrical, hard-swinging style first gained him broad recognition during the 1990’s while working with the bands of jazz legends Art Blakey, Jackie McLean, Chick Corea’s Origin and the cooperative sextet, One For All.

Born in Worcester, MA in 1967, Steve was raised in Binghamton, NY and graduated in 1989 from The Hartt School’s Jackie McLean Institute (University of Hartford, CT).

It was Mc Lean’s guidance and recommendation that helped Davis land his first major gig with Art Blakey in NYC in Dec 1989. Returning to Hartford in 1992, Davis joined Mc Lean’s sextet and begin teaching alongside his mentor at both the Hartt School and Artist’s Collective.

Steve also continues to perform and record with the well-known, collective unit One For All (Eric Alexander, Jim Rotondi, David Hazeltine, John Webber and Joe Farnsworth).

The band has recorded 13 CD’s since 1997 for Sharp Nine, Criss Cross and Venus/Japan. Both their recordings and live performances have garnered rave reviews.

Their latest effort, Return Of The Lineup is featured in the Sept 2009 issue of JazzTimes and was # 1 on the JazzWeek radio playlist for three weeks. www.secondfloormusic.com began publishing One For All sextet charts in two sets, as recorded on the group’s first two CD’s, « Too Soon To Tell » (1997) and « Optimism » (1998) for Sharp Nine Records.

For Steve Davis’ lead sheets and transcribed solos, also visit… www.jazzleadsheets.comEver in-demand as a sideman, Davis is featured on over 100 recordings.

Davis continues to lead an active teaching career at the Hartt School’s Jackie McLean Institute (University of Hartford) where he has been on faculty since 1991 and now teaches alongside longtime colleague Nat Reeves, Rene McLean, Eric McPherson, Shawnn Montiero, Chris Casey, Andy LaVerne, Eddie Henderson and others.

Steve also continues his long-time affiliation with the Artist`s Collective (founded by Jackie and Dollie McLean) in Hartford, CT where he makes his home (in West Hartford) with his wife, pianist/educator Mary DiPaola-Davis and children Tony, Angie and Nicky.