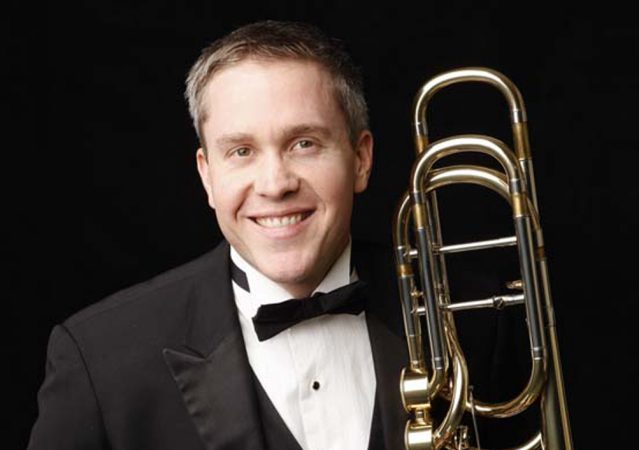 American bass trombonist John Schwalm began his career directly out of college, as the bass trombonist for the Chicago Lyric Opera. He has established a reputation for both being able to fill a hall with a beautiful full sound but also understand and manipulate his instrument to reflect the tender aspects of classical music. In addition to performing with the Chicago Lyric Opera Mr. Schwalm is an active member of the Chicago Trombone Consort and is featured on their self-titled album. He has performed with the Grant Park Festival Orchestra, Chicago Philharmonic and Ravinia Festival Orchestra. While outside Chicago, he has performed with the Cincinnati Symphony, Houston Symphony, Buffalo Symphony and Austin Symphony. Mr. Schwalm’s trombone career began in Texas at the age of ten. He completed his undergraduate studies with the great Donald Knaub at the University of Texas and went on to study with Don Harwood at Juilliard for his Master’s degree. Mr. Schwalm also received coaching with Joseph Alessi, Raymond Mase, Dave Taylor, John Rojak, Per Brevig, David Finlayson, and Charlie Vernon. Mr. Schwalm currently resides in a suburb of Chicago with his wife and son. When not playing trombone he enjoys a myriad of activities from building speakers to running.