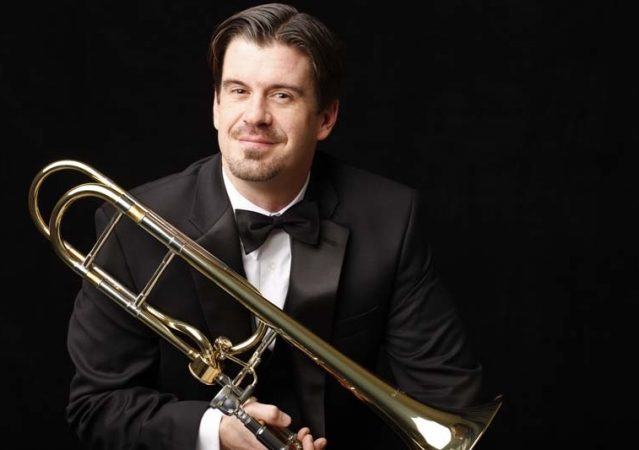 Jeremy Moeller was appointed principal trombone of the Lyric Opera of Chicago Orchestra by Music Director Sir Andrew Davis in 2009. He also currently serves as Assistant Principal/Second Trombone for the Grant Park Orchestra during the summer season, a post he has held since 2004, and Principal Trombone with the Chicago Philharmonic. Prior to his appointment at the Lyric Opera of Chicago, Jeremy served as Acting Second Trombone with the Cincinnati Symphony and Cincinnati Pops for two seasons. He has also performed with the Chicago, Detroit, Houston, Atlanta, San Antonio, Charleston, and Grand Rapids Symphonies. As a chamber musician, Jeremy has performed and can be heard on recordings with the Chicago Trombone Consort, the Burning River Brass, the Tower Brass of Chicago, and the Avatar Brass Quintet. He has also performed on Chicago WTTW’s “Chicago Tonight” and ABC’s “News This Morning”.Jeremy received a Bachelors Degree in Applied Music and a Performer’s Certificate from the Eastman School of Music, where he studied with John Marcellus. He later received a Masters of Music degree at Rice University’s Shepherd School of Music, where he studied with David Waters. He is currently on faculty at Northern Illinois University and coaches brass chamber ensembles at Northwestern University’s Bienen School of Music. Jeremy is an artist/clinician with the Antoine Courtois Instrument Company, and plays on a Legend AC420H tenor trombone and the Prestige AC131R alto trombone.