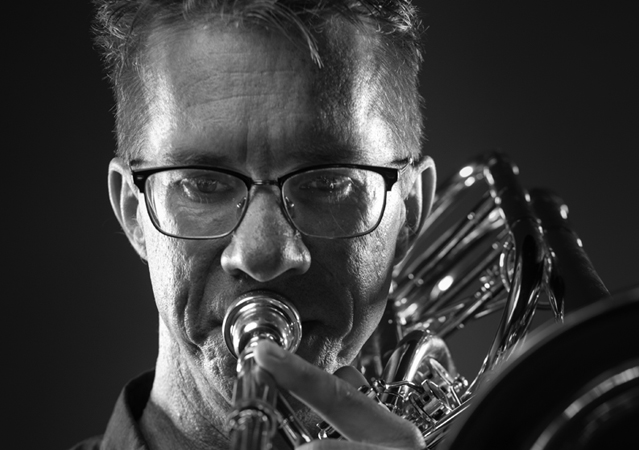 Mark was born in Bletchley, England in 1971 and started his musical studies aged 6 with the piano. He took up the euphonium when he was 11 and quickly became involved with the brass band movement playing with the most important London brass bands at the time . He took classes at the Guildhall School of Music and Drama junior department with John Clark and started playing the bass trombone here under the guidance of Roger Harvey.

In 1991 Mark started his formal studies at the Guildhall School of Music and Drama in London studying euphonium under John Clark and later bass trombone with Ron Bryans, Eric Crees and Simon Wills. He went on to continue his studies with Hans Rueckert and Andreas Kraft when he moved to Mannheim in Germany.

Mark was a member of the Gustav Mahler Youth Orchestra from 1993 to 1996 where he played under Claudio Abbado, Ricardo Chailly and Sir Neville Marriner receiving coaching here from Denis Wick. He was also a member of the Schleswig Holstein Festival Orchestra during this period.

Since beginning these Projects Mark has enjoyed a diverse and active career playing in many of the top orchestras in Europe including Bavarian Radio Orchestra, London Philharmonic, Philharmonia, Royal Philharmonic Orchestra,Tonhalle Zuerich, Deutsche Symphony Orchestra Berlin, Deutsche Kammerphilharmonie Bremen ,Bavarian Radio Symphony Orchestra and many others, including many  Spanish ensembles. He has also had the pleasure of performing under many of the world’s most famous conductors including, Claudio Abbado, Ricardo Chailly, Lorin Maazel, Pierre Boulez, Kurt Mazur, Daniel Harding, Daniele Gatti, Herbert Blomstedt, Fabio Luisi, Gustavo Dudamel, Bernard Haitink, Andris Nelsons,Gustavo Dudamel to name but a few.

Mark has had an active international teaching career in the last ten years having taught across the globe in such institutions as the Australian National Academy of Music, Griffith University and Sydney Conservatory in Australia, the YST school of music at the National University of Singapore, Beijing Central Conservatory and China Conservatory and Shanghai Conservatory in China, South Africa National Youth Orchestra, Guildhall School of Music and Drama, Royal Academy and Royal Northern College of Music in the UK, Dortmund Orchesterzentrum, and Stuttgart Musikhochschule in Germany, and many establishments in Spain.

He is presently on staff at Essen Folkwang Musikhochschule, Franz Liszt Musikhochschule in Weimar, Superior Conservatory of Music of Aragon in Zaragoza and the Alicante Brass Academy.

He holds positions as artistic consultant at both the Youth Philharmonic of Columbia and the Global Youth Orchestra (China). Furthermore he is a tutor at the Alicante Brass Academy, Superior Conservatory of Aragon in Zaragoza, MpMusic academy in Valencia and Gustav Mahler Academy in Bolzano amongst others.

Mark has also been engaged extensively as an adjudicator and jury member globally having worked with the Corpus trombone competition in Hungary and the Beijing Central Conservatory amongst others.