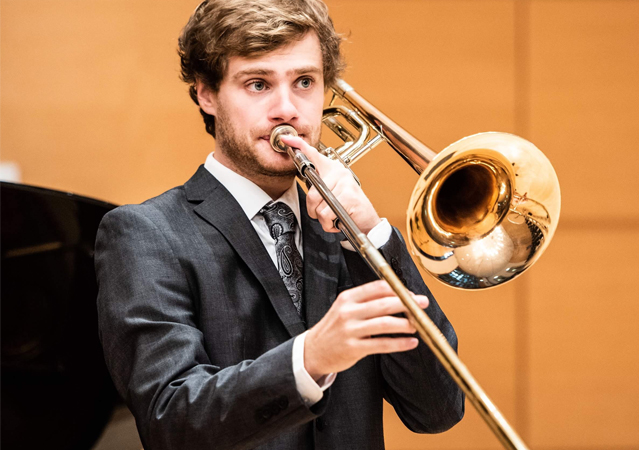 He graduated in 2015 from the Guildhall School of Music and Drama in London with a First Class Honours Degree. During his time at Guildhall he undertook regular lessons with Eric Crees, Peter Gane and Christopher Houlding and later with Fabrice Millischer in Freiburg Musikhochschule.

Kris is extremely busy as an orchestral musician. Besides regular concerts with the German Radio Philharmonic Orchestra, he is performing frequently as guest solo trombonist with many of  Europe’s leading orchestras and has worked with the world’s best conductors, such as the Royal Concertgebouw Orchestra in Amsterdam, WDR Symphony Orchestra in Cologne, City of Birmingham Symphony Orchestra and BBC Scottish Symphony Orchestra (to name just a few). He is fortunate enough to have been a member of both the European Union Youth Orchestra and Gustav Mahler Jugendorchester and travel extensively throughout the world, performing at places such as the Concertgebouw in Amsterdam, the Royal Albert Hall in London, Salzburg Festspielhaus, Hamburg’s Elphilharmonie, the Semperoper in Dresden, Berlin Philharmonie, Prague’s Rudolfinum, Teatro Alla Scala in Milan, and the Seoul Arts Center, and perform in festivals such as The BBC Proms and Salzburger Festspiele.

Alongside his orchestral career, Kris also manages to navigate a busy schedule as a solo musician. He has performed as soloist with orchestras on numerous occasions, with professional ensembles such as the Vilnius City Chamber Orchestra, the Budapest Strings Chamber Orchestra, Jeju Philharmonic Orchestra and Luxembourg Military Orchestra and has performed concertos by ‪Nino Rota‬, Henri Tomasi, Lars-Erik Larsson, Christopher Rouse, ‪Vladimir Cosma‬ and Gyula Fekete and a sonata by Benedetto Marcello. Shortly after winning his job in 2016 Kris experienced an increased interest and love of the trombone’s wonderful solo literature, leading him to start a duo with the exceptional Korean pianist, Seri Dan. Together they perform regular concerts throughout Germany and beyond. In the 2020 season they already have recitals confirmed in Shanghai in China, Jeju in South Korea as part of the Jeju International Wind Festival, Royal Birmingham Conservatoire, St Martin in the Fields and St James Picadilly (both in London), Lake District Music Festival, Lichfield Music Festival and the IPV (the German Trombone Association) Festival.

Kris also has a passion for music education and regularly offers guidance to trombonists of all levels, on a private basis and in the form of masterclasses. He has been the brass tutor of the City of Sheffield Youth Orchestra since 2016.

As well as Kris’ first prize competition successes in Korea, Budapest, London, Germany, and Lithuania, he was also the first prize recipient of the Guildhall School of Music and Drama’s Brass Prize (funded by the Armourers and Brasiers) in May of 2015.