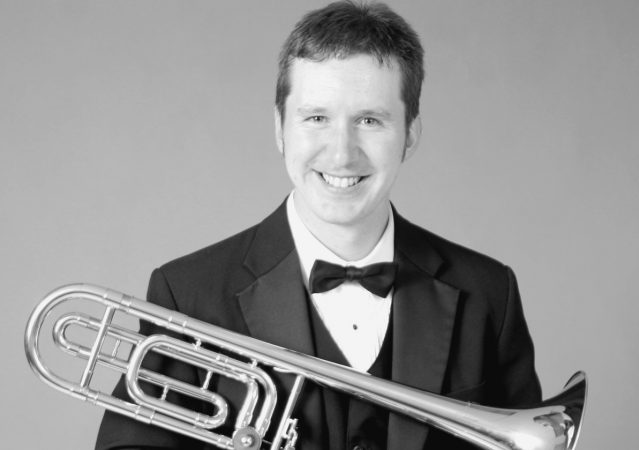 Christopher Dobbins is currently the Director of Bands & Brass Studies at Sul Ross State University, where he conducts the Sul Ross State University Wind Ensemble, directs the athletic and mariachi bands, and teaches applied brass, music theory, and music education courses. Prior to his appointment at SRSU, Chris taught at Our Lady of the Lake University, Texas A&M International University, and Saint Mary’s Hall College Preparatory School. Chris holds a Master of Music degree in Trombone Performance from the University of Utah where he studied with Larry Zalkind, Jim Nova, and Dr. Donn Schaefer. At Utah, he was a Graduate Teaching Assistant for the Utah Bands, working with the Marching Utes, gymnastics band, and serving as a guest conductor with the acclaimed University of Utah Wind Ensemble. Chris also holds a Bachelor of Music degree in Trombone Performance and a Bachelor of Music Education degree from Hastings College, where he was the institution’s Theodore Presser Scholar in 2006. Chris is currently purusing the Doctor of Education in Music Education degree from the University of Georgia Hugh Hodgson School of Music.Chris is a sought after conductor, clinician, and adjudicator. In addition to his academic conducting engagements, he is active as an honor band conductor and music festival conductor, conducting numerous performances including the 2012 West Texas Honor Band and the 2009 Festival Choir at the International Trombone Festival in Aarhus, Denmark. He has been a guest clinician at numerous marching, concert, and jazz festivals throughout the south and southwest, and is often engaged as a guest clinician for high school wind ensembles and marching bands working towards contest.As a trombonist, Chris has had the opportunity to perform in a wide range of styles. He has performed with the San Antonio Wind Symphony, the Heart of Texas Concert Band, the Orchestra of the Big Bend, the Utah Philharmonia, the Salt Lake Symphony Orchestra, the Stratford Street Big Band, and the Hastings Symphony Orchestra. He serves as the Assistant Director of the International Trombone Festival, and has been involved with festivals from Salt Lake City, Utah to Aarhus, Denmark and many locations in between. Chris maintains professional affiliations with the Texas Music Educators Association, Texas Bandmasters Association, National Association for Music Education, the International Trombone Association, and Phi Mu Alpha Sinfonia. He currently resides in beautiful Alpine, TX with his lovely wife and a houseful of furry children.Chris is a Buffet Crampon artist, and performs exclusively on Antoine Courtois Paris Trombones and Hammond Design mouthpieces.