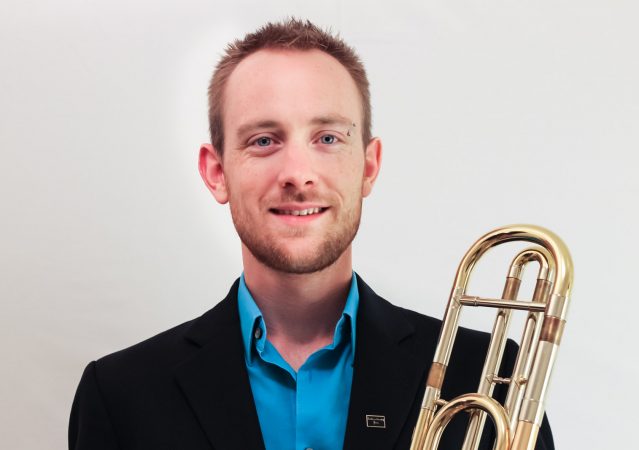 Carl Lundgren is from Calgary, Alberta, Canada, and is a trombonist/composer/arranger in the D/FW area. Equally at home playing classical, jazz or pop music, Carl also arranges and composes in a variety of styles. An alumnus of The University of North Texas (BM, MM), Carl toured and performed with the six-time Grammy-nominated One O’Clock Lab Band, whose CD “Lab 2009” was nominated for two Grammys. During his 3 years in the band, Carl toured Europe and Thailand, and performed at Birdland in New York, and Catalina in Los Angeles. Carl is a founding member of the Maniacal 4 trombone quartet, an internationally acclaimed group of ‘four great musicians telling one unified, inspiring musical story after another’. He is an alumnus of both the National Youth Orchestra of Canada, where he played and recorded for 3 summers, as well as l’Orchestre du Francophonie. In June 2011, he was runner-up in the International Trombone Association’s Alto Trombone Competition. With Maniacal 4, Carl has toured and performed on 3 continents, entertaining audiences with a wide range of styles and time periods. Hailed as ‘a force to be reckoned with,’ M4 performs its concerts almost exclusively from memory, projecting a ‘clear, unified, uplifting and committed musical vision on par with great CHAMBER ensembles.’ Carl composes and arranges most of the group’s music, and has created unique collaborations for M4 at International Trombone Festivals in Nashville and Paris, and Slide Factory 2012 in Rotterdam. In 2012, M4’s highly-anticipated debut CD, ‘Carry On’ was released: a tribute to to the classic rock legends of the 1970s. Carl’s arrangements replace guitar solos with effects pedal-driven trombone distortion, and backed by a rhythm section, add tight brass chords in lieu of vocal harmonies. With recent viral YouTube exposure, M4’s strong online presence has launched them into an innovative and exciting new phase of their careers.Carl is sponsored by Buffet Group USA and Dansr Inc, and performs exclusively on Antoine Courtois Paris trombones and Denis Wick mouthpieces.