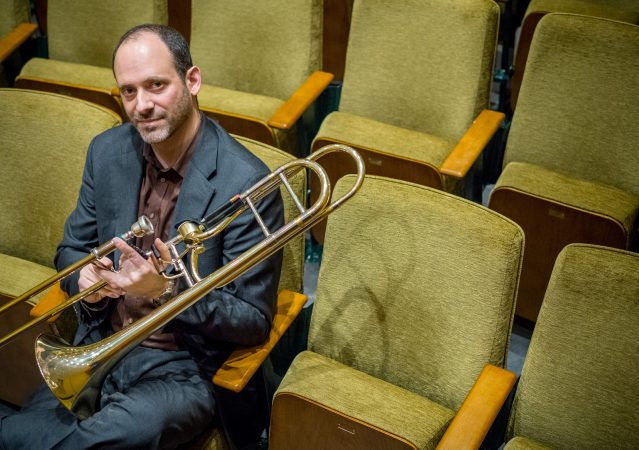 Professor of Trombone at John J. Cali School of Music

A native of Maplewood, New Jersey, Anthony Mazzocchi began studying trombone at the age of eight. While receiving a Bachelors and Master’s degree from the Manhattan School of Music in NYC, he studied with Per Brevig of the Metropolitan Opera Orchestra, Steven Norrell, David Finlayson and Joseph Alessi of the New York Philharmonic. He received the Janet Schenck Award for Outstanding Musicianship from the school in 1997.Upon leaving Manhattan School, Mr. Mazzocchi has performed with the Los Angeles Philharmonic, New Jersey Symphony, San Diego Symphony, San Diego Opera, Riverside Symphony, and Key West Symphony, to name a few. He has performed in various Broadway shows and can be heard on numerous recordings and movie soundtracks.Mr. Mazzocchi is currently the Associate Director and Professor of Trombone at the John J. Cali School of Music at Montclair State University in New Jersey. He is also Co-Executive Director of the Kinhaven Summer Music School in Vermont with his wife, Deborah.In 2013, Mr. Mazzocchi was nominated for the first ever GRAMMY music educator award; he was one of 25 finalists among over 30,000 candidates.Mr. Mazzocchi also serves as faculty or as a frequent guest lecturer at The Juilliard School, Manhattan School of Music, Mannes College of Music, and NYU.Mr. Mazzocchi’s private students have been accepted to Juilliard, Eastman, Manhattan School of Music, and Mannes College of Music to name a few. He is a guest clinician with the New York and New Jersey Youth Symphonies, and a guest artist for various honor bands and orchestras in the New York area.Mr. Mazzocchi has been a soloist and clinican at New York University, University of Southern California, University of California Los Angeles, Montclair State University, Brooklyn College, and Cal Tech University. He resides in Maplewood, NJ with his wife, Deborah, son Luca, and daughter Tahlia.