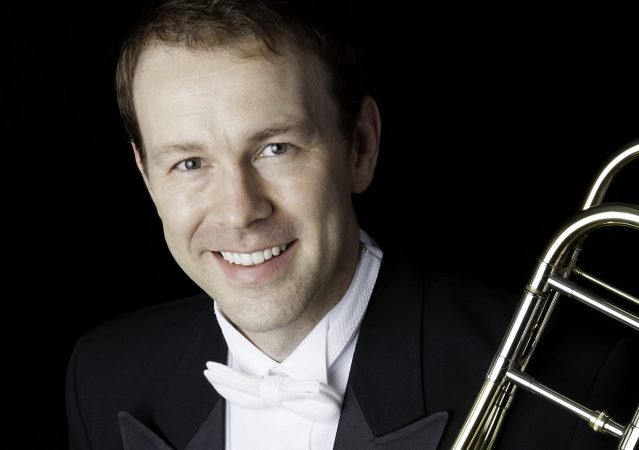 Demian Austin is principal trombonist of the Metropolitan Opera Orchestra. He is also a member of the MET Chamber Ensemble, which performs regularly at Carnegie’s Weill and Zankel halls. He has performed with The Chamber Music Society of Lincoln Center, and in the Mostly Mozart festival at Lincoln Center. Mr. Austin has played on numerous recordings including the Metropolitan Opera Brass CDs, several movie soundtracks, Dialogues with Double Bass with Jeremy McCoy on Bridge Records, the GM Recordings issue of Beethoven’s Fifth Symphony and Brahms’ First Symphony conducted by Gunther Schuller, and many recordings with the Metropolitan Opera Orchestra, including Strauss’ Tod und Verklarung. He can also be heard regularly on Sirius Satellite Radio’s Live at the Met Broadcasts, the Saturday Matinee Broadcasts of the Met, and on The Met: Live in HD worldwide movie simulcasts. Mr. Austin is also on the faculty of Juilliard’s precollege division. He received his Bachelor of Music degree in 1992 from Oberlin College, where he studied with Raymond Premru, and his Masters of Music degree in 1995 from The Juilliard School, where he studied with Per Brevig. Aside from his career in music, Mr. Austin has a keen interest in film and has attended several intensive seminars on screenwriting.